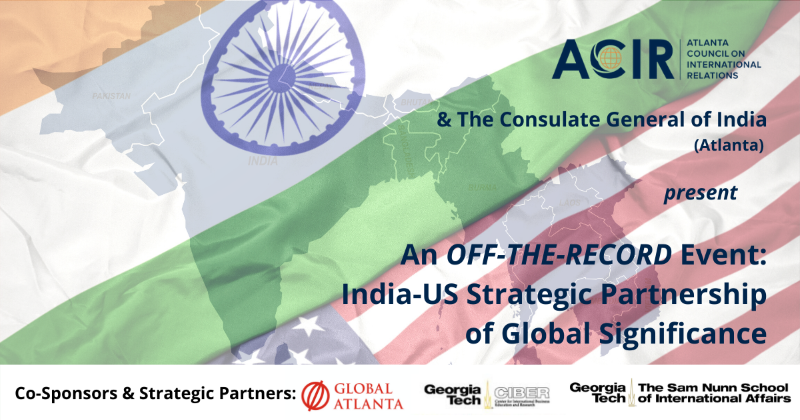 Please join us in-person for an OFF-THE-RECORD luncheon and discussion with the Indian Ambassador to the U.S., Ambassador Taranjit Singh Sandhu.
Over the last two decades, India and the United States have crafted a remarkable partnership, built on a bipartisan consensus in the U.S. and cross-party support in India. As we face the twin crises of the pandemic and economic slowdown, India & the US also have a unique opportunity to work together not just for each other’s benefit but for the benefit of the world at large.
Price: Members $40 / Non-Members $50 /Students $25 (Lunch & Parking included)
REGISTER here
Lunch: Three-course dinner, including salad, choice of entree, dessert, ice tea and coffee. Entree choices:
Regular: Pink Peppercorn and Tarragon Crusted Grain-feed Chicken Breast, Yukon Gold Whipped Potatoes, Lemon Thyme
or
Vegetarian: Grilled Polenta Cake (Gluten Free) Wild Mushrooms, Asparagus, Seasonal Vegetables Red Pepper Coulis

About Ambassador Sandu
Ambassador Taranjit Singh Sandhu is one of the most experienced Indian diplomats on US affairs, having served in the Indian Mission in Washington DC twice earlier. He was Deputy Chief of Mission at the Embassy of India in Washington DC from July 2013 to January 2017. Earlier, he was First Secretary (Political) at the Embassy of India, Washington, DC responsible for liaison with the United States Congress from 1997 to 2000. He has also been at the Permanent Mission of India to United Nations, New York from July 2005 to February 2009.

Prior to his current assignment in Washington DC, Ambassador Sandhu was High Commissioner of India to Sri Lanka from January 2017 to January 2020. He had also served at the High Commission of India, Colombo earlier as the Head of the Political Wing from December 2000 to September 2004.

Ambassador Sandhu was Consul General of India in Frankfurt from September 2011 to July 2013. He has worked in the Ministry of External Affairs in various capacities: as Joint Secretary (United Nations) from March 2009 to August 2011; and later as Joint Secretary (Administration) heading the Human Resource Division. He was Officer on Special Duty (Press Relations), Ministry of External Affairs from December 1995 to March 1997, and was responsible for liaison with foreign media in India.

In a distinguished career spanning over thirty years in the Indian Foreign Service since 1988, Ambassador Sandhu started his diplomatic career from former Soviet Union (Russia) where he worked as Third Secretary (Political) / Second Secretary (Commercial) in the Indian Mission from 1990 to 1992. Following the breakup of Soviet Union, he was sent to open a new Embassy in Ukraine. He served as Head of Political and Administration Wings in Indian Embassy in Kiev from 1992 to 1994.

Born on 23 January 1963 in a family of educationists, Ambassador Sandhu studied at The Lawrence School, Sanawar and graduated with History Honors from St. Stephens’ College, Delhi. He pursued a Master’s Degree in International Relations at the Jawaharlal Nehru University, New Delhi.

Ambassador Sandhu is married to Mrs. Reenat Sandhu, who is a senior officer in the Indian Foreign Service. They have two children. His interests include books, movies and outdoor sports.

Ambassador Sandhu assumed charge as Ambassador to the United States on February 3, 2020.

Ambassador Sandhu presented his credentials to the President of the United States of America, H.E. Mr. Donald Trump at the Oval office of the White House on 6 February 2020.