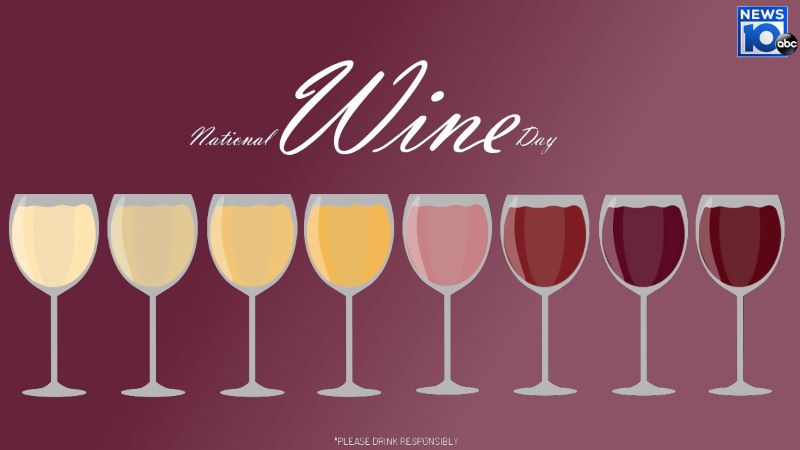 Get ready to unwind with a glass or two of your favorite Cabernet Sauvignon or Chardonnay. Wine has been a staple in human culture since its invention in 7000 BC. Some ancient societies enjoyed their wine so much, they even worshipped it! These days, hundreds of types of wine are produced all over the world, so there’s an endless variety to choose from.

HISTORY OF NATIONAL DRINK WINE DAY
While we know humans have been making wine for thousands of years, no one is certain who was the first to ferment grapes into the beverage we now call wine. Evidence of ancient wine production has been found in China, the Middle East, and Greece, so it appears many different cultures discovered the process at nearly the same time. The oldest known winery was found in a cave in Armenia, and is over 4,000 years old — The vinters there were using a grape still used to make wine today! Barrels of wine have been found in the tombs of Egyptian Pharaohs, and the Ancient Greeks used wine in secret religious ceremonies. Although wine has taken all sorts of different forms throughout the ages, the process has changed very little in the thousands of years since its invention. Grapes are crushed, pressed, and fermented, and the mixture is sealed into barrels. The mixture is aged, and then bottled. Using these simple steps, an infinite variety of wines can be created, and different regions of the world are known for the distinctive vintages they produce. Things like soil, temperature, and weather all affect the way wine grapes grow, and make each batch unique. Two bottles of the same wine from the same vineyard might taste totally different depending on the year they were produced, and some vintages become highly sought after as a result. Use this National Drink Wine Day to try a new bottle, and relax with the knowledge that you’re celebrating a long, long human tradition.